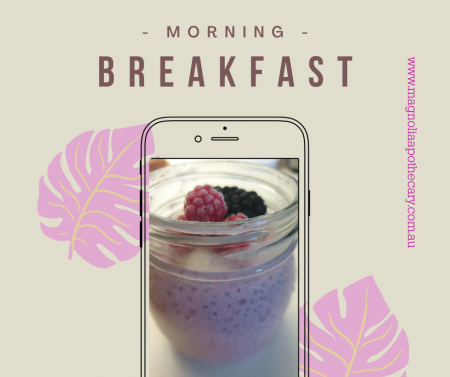 I am a creature of habit when it comes to breakfast because I love eggs on toast with avocado, I could have that every day (and often do). But last year I went on a personalized eating plan which restricted my egg intake (due to a prevalence of higher than acceptable cholesterol) and instead had me eating sheeps yogurt. I am not a huge fan of any yogurt and especially first thing in the morning. But I persisted and lost the weight I wanted.

Enter covid and I sitting at home eating and drinking too much, and of course the weight is back. So I am wanting to get back to the program but cannot stomach the sheeps yogurt for breakfast. And because I don’t eat the planned breakfast I feel like I can’t do the program.

So, I realised I needed to come up with some new ideas for breakfast. On my plan I can also have nuts and seeds so I needed to find some good breakfast meals to replace the sheep’s yogurt. Don’t get me wrong sheep’s yogurt is a healthy option, as it is full of nutrients and high in omega’s.  I was looking for some plant based ideas that are good for gut health.

So on my list of yummy items to make are: 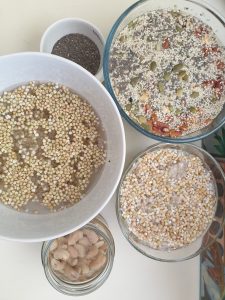 It does take some planning to make these recipes as you need to soak all the nuts and seeds. You do this to activate them and allow the nutrients to be easily accessed. This means you get more of the good stuff that will help your gut.

Some need more soaking than others and it depends on what your are making with them. Take the cashew cream that only required 2 hours of soaking and was super easy to make.

But the buckwheat for the bread needed 24 hours or overnight, as this makes it more mushy. Buckwheat is usually activated in a shorter time (7 hours) but I was wanting it to be softer and I also used the gelatinous substance in the bread. 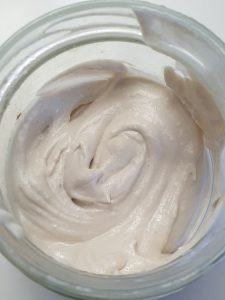 This was very easy to make. And it was the first time I have made this.

You just needed to soak the cashews for at least 2 hours and then put them in the blender with lemon juice and salt (for a savory cream) or maple syrup and vanilla essence (for a sweet cream). Add some water and blend until nice and creamy. 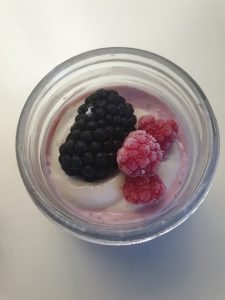 Another super easy one and you don’t have to soak before making this one. Although they do need to soak overnight once you have made it.

I have made plenty of chia pods before and the trick to making a tasty pod is to mix some flavour into your milk before soaking. For this one I used raspberries (as I have a large quantity in the freezer from my own crop) which I blended with some coconut milk and a little vanilla essence. The coconut milk was left over but you could use almond instead. Almond milk will increase the protein level where as coconut will increase the fat content.

You could also add a little maple syrup if you need a bit extra sweetness. I didn’t need it as the raspberries were enough.

To serve add some mint, kiwi or more berries and some maple syrup ( I used the cashew cream and granola which was delicious).

Blend your fruit and half the milk and then pour into jars. Divide and add the rest of the milk and the vanilla, give it a stir and put into the fridge. About an hour later give it another stir then leave overnight. 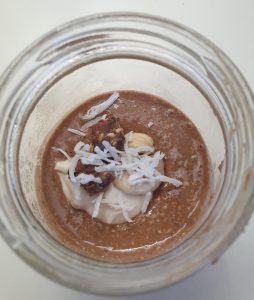 I have used buckwheat flour and groats for along time due to eating gluten free, but I had never made a porridge out of them and not a chocolate one either. So this recipe really appealed to me.

This recipe does require you to soak your buckwheat groats (you will find them at the supermarket usually in the health section) for at least 6 hours. This will release the phytic acid and make them easier on your digestive system as well as releasing all the good stuff.

Buckwheat is full of protein, fibre and energy and is great for coeliacs as it is gluten free. It is a similar grain to quinoa and is beneficial for heart health, the digestive system and weight control.

To serve: top with any of these, more banana, some nuts, shredded coconut, raw grated chocolate, cashew cream or granola. 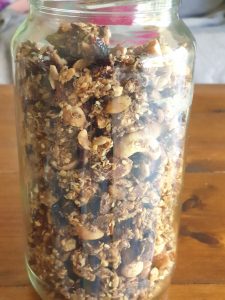 If you eat gluten free or are a coeliac you will understand how hard it is to find a good muesli or granola that tastes nice (and not like cardboard) and doesn’t cost a bomb! So when I saw this recipe I decided to give it a go. I have made granola before but not like this.

This recipe does recipe soaking for at least 6 hours, then you need to rinse and because you are soaking sesame seeds and chia seeds, you need a fine sieve to rinse. This ends up looking quite gelatinous due to the chia seeds but it is still easy to handle.

This is also required to either dehydrate for 24 hours or oven bake on a very low heat for 10 hours. I put mine on over night in the oven and lowered to temperature (as I know my oven has a tendency to overcook). The recipe calls for 45 C (115 F).

Other than that you can add whatever you like. I swapped a few items off the list because I didn’t have them. The result was great (and not burnt like I thought was going to happen), with crispy light weight granola and slightly chewy fruit parts. I can eat it as a snack, but that is because I love nuts and dried fruit together.

Set aside a handful of the nuts and seeds. Place remaining nuts and seeds in a bowl and cover with water. Let soak for at least 6 hours. Drain and rinse. Transfer to a towel to remove remaining liquid and pat dry.

Process in a blender for 10 seconds to break up mix. Then add coconut oil, maple syrup, spices and salt. Pulse to combine.

Mix in the reserved nuts and seeds, along with the dried fruit. Spread onto trays and cook for 10 hours in oven or 24 hours in a dehydrator.

Serve with cashew cream or yogurt (even some sheep’s yogurt!) 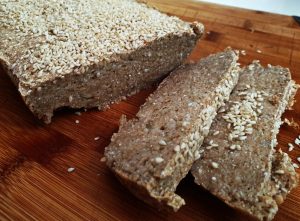 I normally buy a good GF bread from GF Precinct and I especially like their sprouted bread. But it can be hard to find as my local only gets a delivery twice weekly and if they are out I need to travel to find it. It is also a fairly costly product.

I have tried to make gf bread before with some success and many failures! I have often made a sprouted buckwheat bread, which tastes nice but tends to fall apart and it takes 48 hours to ferment. Then I have made coconut based breads that turned out like a brick and tasted a bit like one as well!

So I decided to try a combination using the sprouted buckwheat groats and a paleo flour. The flour contains flaxseed flour, tapioca and coconut flour. I also added some seeds including pumpkin and sesame. Not sunflower as they tend to turn your bread green when baked!!!! The first time I saw that I thought I had mouldy bread!!

The results was not quite as I hoped as the loaf didn’t rise as much as I would have liked. It could also have been cooked a little longer as it is very dough like. But even so, I quite like a heavy bread and it tastes really nice. It was great with a bit of butter and homemade jam. It will also go very well with my avocado and eggs in the mornings!!!

At least it is not like a brick and it also doesn’t fall apart, so I would call that a mild success!!

Either way all of these recipes are good for your gut health as sprouted nuts and seeds have activated allowing a better absorption of nutrients to be extracted and therefore better for your gut. If you suffer from bloating then soaking is a great idea as it will reduce gas causing compounds.

Breakfast should contain a nice balance of macro nutrients, that is protein, fats and carbs. These recipes contain a good balance of these (except for the loaf, but when you add a topping it will especially if you are using a nut butter or avocado).

It is very important if you are eating vegan to understand where you get your protein and omega’s from as these are often lacking when not eating animal products.

Eating a plant based diet is good for your digestive and cardio vascular system. I am not vegan or vegetarian, but do like to have a broad range of foods including using plant based food. Sometimes my body actually craves it.

Recipes thanks to “The Raw Kitchen”.

Book in for your Free 15 minute Discovery Chat Dismiss

You can find out more about which cookies we are using or switch them off in settings.

This website uses cookies so that we can provide you with the best user experience possible. Cookie information is stored in your browser and performs functions such as recognising you when you return to our website and helping our team to understand which sections of the website you find most interesting and useful.

Strictly Necessary Cookie should be enabled at all times so that we can save your preferences for cookie settings.

If you disable this cookie, we will not be able to save your preferences. This means that every time you visit this website you will need to enable or disable cookies again.